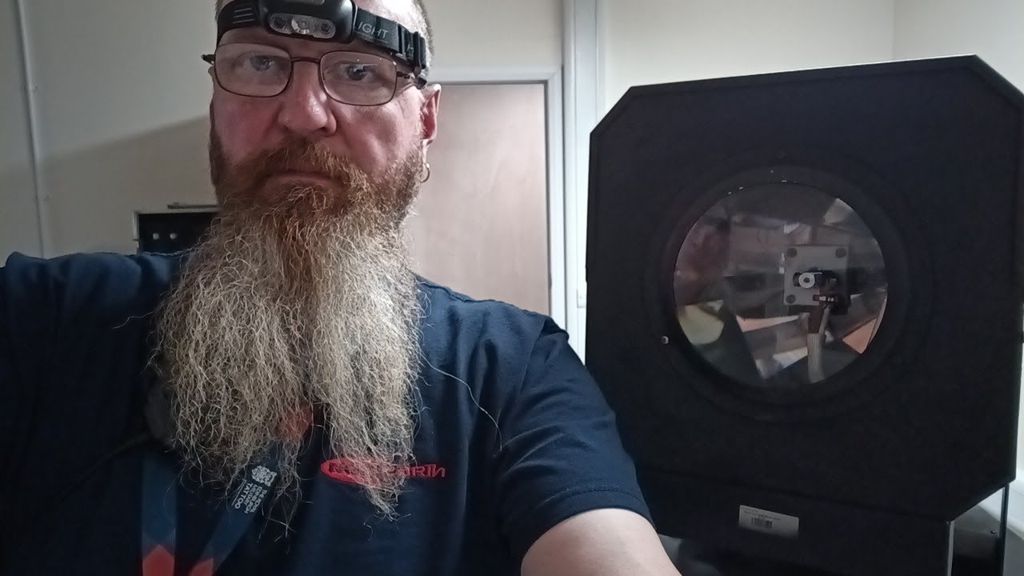 This is a very retro light that uses a high power 3kW xenon projector lamp to blast out a multitude of intense beams of white light that rotate, expand, contract and pan back and forth.
It used to be used a lot in the UK to attract attention to outdoor events by firing into the air so that the beams projected onto clouds.
The base has two ballasts, a fan, a small transformer, control PCB and the pan motor assembly.
It uses a potentiometer on the gear assembly for the pan system to detect position and movement. The DMX data input provides external control over speed of pan, beam rotation, beam expansion and the shutter. You can also set these to fixed values locally.
A knob on the control panel lets you set the panning sweep range. In this case the unit was not responsive to most of the pan adjustment range with just a short pan-segment active at the extreme end. After validating the integrity of both potentiometers, and ensuring that the main detection one was being used within its range, I noticed that the pan adjustment knob's connector had a calibration pot associated with it that was set at an extreme position.
After noting the original position I adjusted it back slightly and the pan segment size increased accordingly. At the point the knob had full control and the pan was stopping just short of its end stop, the calibration pot was dead centre.
I wonder if someone had screwed the calibration pot to an extreme position while trying to find another fault, or maybe done it deliberately to restrict the pan angle for some unknown reason.
There were other signs of "unusual" repairs, including replacing a four way dip switch with a 12 way one wrapped in tape and mounted on the PCB at an angle to clear other components.
I specifically avoid using intrusive mid-run video adverts for a more relaxing viewing experience.
If you enjoy these videos you can help support the channel with a dollar or two for coffee, cookies and random gadgets for disassembly at:-
https://www.patreon.com/bigclive
Patreon supporters get early access to advert-free videos as they are made, and also regular live streams.
The Patreon support keeps the channel independent of YouTube's advertising algorithms allowing it to be a bit more dangerous and naughty.
Other contribution options are available at:-
http://www.bigclive.com/coffee.htm
#ElectronicsCreators

15 thoughts on “Inside a high power xenon space-flower light”