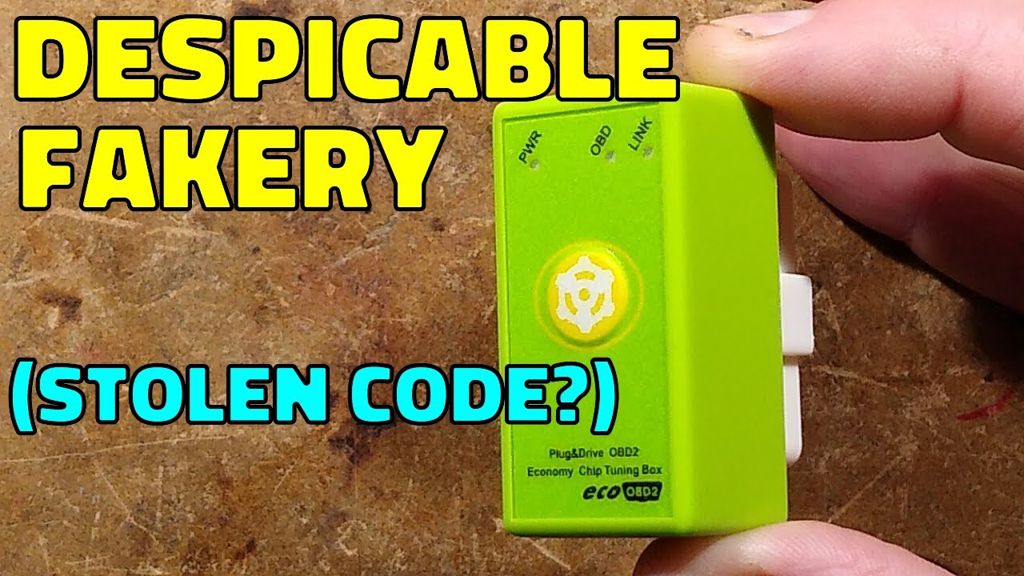 There's something VERY suspicious about this fake fuel saving product. Why would they use analogue circuitry to turn a microcontroller on and off?
This is a fake OBD engine optimiser which incorporates rogue network interface circuitry with the usual pretend network activity LEDs, but it uses an on/off button that could have used a spare I/O pin on the microcontroller, but instead fudges it with transistors. That makes me wonder if the design was done by someone who used existing software, but didn't have the knowledge to customise it or rewrite it from scratch.
It's not complex software at all. Even in raw assembly code it's just a sequence of bit toggling, loops and delays. It's easily a days work to write and fine tune the software from scratch.
The use of a double sided PCB with fake tracks leading to hidden through holes is pretty devious. It cast enough doubt into my mind to make me desolder components to confirm that the tracks were indeed hidden dead-ends.
Pretty devious. But the reverse engineering was aided admirably by rum and cream soda.
Supporting the channel with a dollar or two on Patreon helps keep it independent of YouTube's quirks, avoids intrusive mid-video adverts, gives early access, bonus footage and regular quiet Patreon live streams.
https://www.patreon.com/bigclive
#ElectronicsCreators

Inside a soviet ionizer from 1990 with schematic

12 thoughts on “Fake product with stolen software? with schematic”

Inside a soviet ionizer from 1990 with schematic

Can we fix a high voltage igniter?