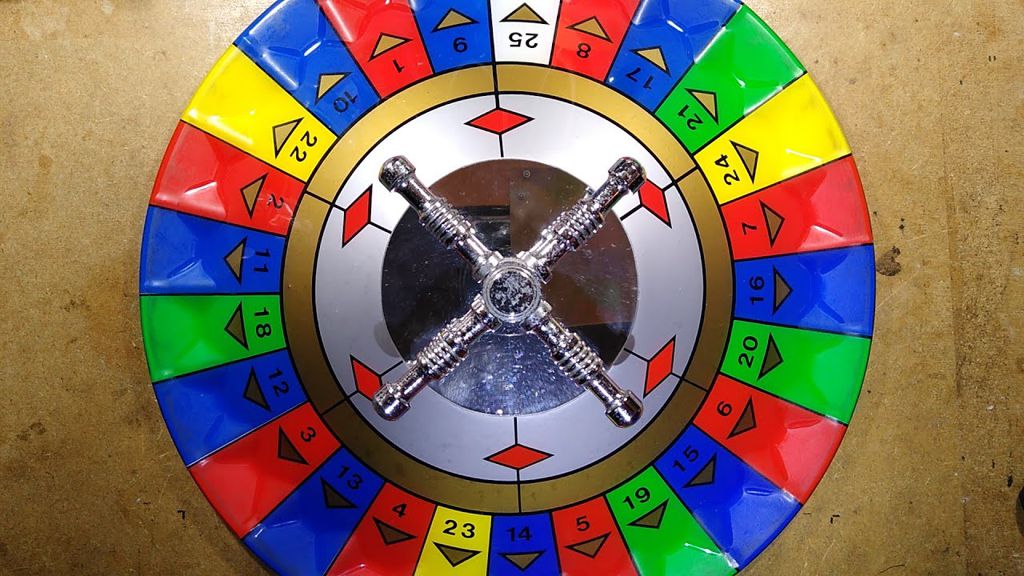 This is the motorised roulette wheel mechanism out of a huge six player arcade machine. This type of machine has been around since I was a kid, but the technology has evolved greatly.
The first units had a mains motor and cam-switch sequencer that spun the wheel and then waited for the ball to land in one of the indents. Each indent had a switch in it, and there were slip rings to allow the machine to detect which colour had been landed on.
The machines are notable for their very characteristic coin acceptors. You place your coin vertically into a slot of the chosen colour, and it initially sticks up, allowing you to change your mind and swap it to another position. When the wheel starts spinning a solenoid/magnet system in each play position makes a loud clack noise and lets all the coins drop past simple coin rejectors and switches that latch the chosen colour.
The next era of machines had a hole in each indent position and a bright light above, and used light sensors to get a reference position and detect the ball.
The current era use an infrared sensor to detect the wheel position and an inductive sensor to detect the ball, counting stepper motor steps to determine its position on the wheel. I would guess that the software can detect a missing/stuck ball that doesn't land, and also tampering if it detects something unexpected. It might be quite hard to tamper anyway, since the machine rotates twice to check the ball is in the same indent before paying out. If it has moved indent it keeps rotating until the ball has settled reliably into one position for two full rotations.
I roughed up a test circuit with a PIC microcontroller switching the stepper motor via a ULN2803 octal Darlington driver, with each channel powered by two parallel outputs. The stepper was sequenced one winding at a time, and even with soft speed ramps it took a much higher voltage to get reliable rotation at high enough speed to launch the ball. I think that as long as it can get the ball out of the indent it will be "batted" by other indents to get the ball into orbit.
Even at the higher voltage the current was just under 1A on a motor rated 5V/1A per winding, and remained cool. Perhaps using MOSFETs for more solid switching would have been more efficient.
I calculated the stepper to ball-indent ratio at 40 steps per wheel position. That's based on 25 positions in a 360 degree sweep and a stepper motor with 1.8 degree steps geared down 5 to 1.
Here are some video links to see the full machine in action:-
https://www.youtube.com/watch?v=zbRAIrZDLsE
https://www.youtube.com/watch?v=KRmNjRndx48
If you enjoy these videos you can help support the channel with a dollar for coffee, cookies and random gadgets for disassembly at:-
http://www.bigclive.com/coffee.htm
This also keeps the channel independent of YouTube's advertising algorithms allowing it to be a bit more dangerous and naughty.
#ElectronicsCreators

This is a rather unusual ebay, find it's a roulette wheel out of a classic british amusement arcade game where you had a huge machine and right in the middle. Was this plastic dome with this feel underneath and every so often it would spin and launch the ball and orbit? Then it would stop and go in opposite direction and go around slowly to find out where it landed and pay out. Accordingly, if you had chosen those colors, so i've roughed up some software to show you this, i'm going to take the ball off initially and i'll put it on afterwards. But when this runs, there is going to be a lot of movement to the screen.

This thing is going to be spinning. Goodness knows what the youtube compression algorithm is going to make of it, but it's going to go into two modes: it's going to go into the launch mode, which is fast and then after it's done that will suddenly reverse go into slow mode to actually hunt for The ball, so it's about to do that now stand by for movement, so this is the launch bit. I should pop that there and then it hunts at slow speed until the ball lands and it gets a double confirmation. It's seen it then it launches it across.

My workbench again and and uh waits for it to land. Again, i would have liked the whole machine, but that was not practical, it's huge, but that is it. It looks quite good, very visual, and it sounds quite good too. So, let's take it to bits.

This thing is actually quite big, far too big for the bench really, but i shall show you initially that uh it has well, let's show the other end. I'd better, just take the wheel off this. Wouldn't i i would so here is how the wheel comes off. It you loosen this off.

Oh it unscrews squeaky squeaky comes off completely like a tap and then the actual relectus comes off. Their left disc appears to be vac formed with a printed surface, laid in the back before it's platformed, i'm guessing. It's quite neat. It's very stylish, it's very colorful.

I think this is an anti-slip pad. There is also an indent hole here with an extra layer of plastic put in here to give it extra support where it attaches to the shaft and just for strength. I guess, but that indent hole is quite important because it references with the highest paying uh and the only one of the one in 25 chance of getting white here is the mechanism itself gon na focus down onto that just in case it's not in focus. I could actually just power this up again hold on.

I will power up again, so you can see the mechanism operating things worthy of note. There is a big stepper motor here, five volt step or more. I had to drive it with much more than five volts uh. There is a optical detector board screwed onto a convenient piece of wood.

These were all pretty much handmade. So there's little features like that that probably these days they might 3d print something, but the odor is absolutely fine. So there's an optical slot detector and reference to that zero position. Is this little flag that passes through that there's also an inductive sensor that detects well.
I'm just going to show you: where is the ball? The ball has gone into orbit. I think so yeah, but anyway it detects the ball passing over the top of this. There is uh just by its vicinity to the inductive sensor, so i shall power this up and it will short short. It will start spinning again.

Oh you know what it's not like, that is it. It's not good inertia to actually go up to full speed. So the stepmom was skipping. I had lots of problems with that when i was doing this yeah it doesn't, it doesn't want to play.

Does it? Oh, that's noisy anyway. I shall stop it. It's fine with the low speed, but it's it needs the inertia of the disc to get up to the higher speed and a ballistic curve. You may have heard that, and that is more or less it so big fat motor here, aster sun, stepper, motor 5, volts uh, 1.8 degrees, 1, amp, 5, ohms.

Definitely five ohms, but i found well maybe there's losses because here's the circuitry i uh, built to actually run it. It's a uln-2803 which is a octal darlington driver, but i've paired them up into sets of uh two and then there's a pic12 microcontroller with a little bit of assembly code, just to actually give the ramping speed for the stepper motor and sequence them in the correct Order and direction and improvised, i was hoping to run the whole lot of five volts. There was a little bit of decoupling with this capacitor here and a resistor, and then i had to put a 5.1 volt zener in there just to clamp the voltage across the processor, because i ultimately had to push it up a lot higher to get the torque Required to actually be able to throw up to the full speeds, i'm not really sure what voltage it uses: natural arcade machine but uh that is it just putting this stuff out the way. So the unit has three cables.

It's got this cable, which is quite thick. Actually, which is the optical sensor, and what actually happens is that when it slows down it detects that flag and it starts counting the pulses and if you divide it down, it worked out about uh. I'm going to have to calculate this because of the turns ratio. Here, uh not sure the turns ratio is from that to that, but it works at a fairly large number of pulses and it can count by counting those pulses.

It can determine where it is on the wheel and it resets. Every time this flag passes and the flag is just when it's rotating it's just at the start of the first uh of the first side of the white segment. So if it counts, and within that count it sees the ball pass over the inductive sensor. It then rotates for one more revolution.

If the ball is still in that position, it will uh stop the wheel and that's a the winning number, and then it will launch the ball again and play the next game. However, if it sees the ball pass over and it does a full revolution, it's in a different position, it'll reset - and it will go another revolution to see it until it sees it's in the same location and if it doesn't see the ball at all, i'm not Sure i don't know what the software would do there. It should hopefully flag it up uh that there's a problem that it's lost the ball in the game, but this is it it's very robust. It's very chunky machine, it's mere whittaker's on the side, good big bearing under there.
These machines just run day in day out in arcades, the most common problem. I see if you i'll, provide links to videos showing this in operation, and the most common problem i see is that the wheel is fine in the low speed, but just as you saw there when it was actually skipping uh, it was losing traction. The high speed, because it is kind of close to edge for this motor being able to throw that wheel about at a fairly high speed um. I ended up turning the voltage up too.

Just give me a second 10 volts to actually make it do that. But that's possibly because there's a bit of voltage drop across the darlingtons. I possibly have used uh mosfets these days with suitable protection diodes, but there we have it uh the insides of our whitaker roulette machine, it's very nice very robust, but then it would be. And when you see it, it's so simple, like just the optical sensor for positioning stepper motor and the inductive sensor for detecting the ball.