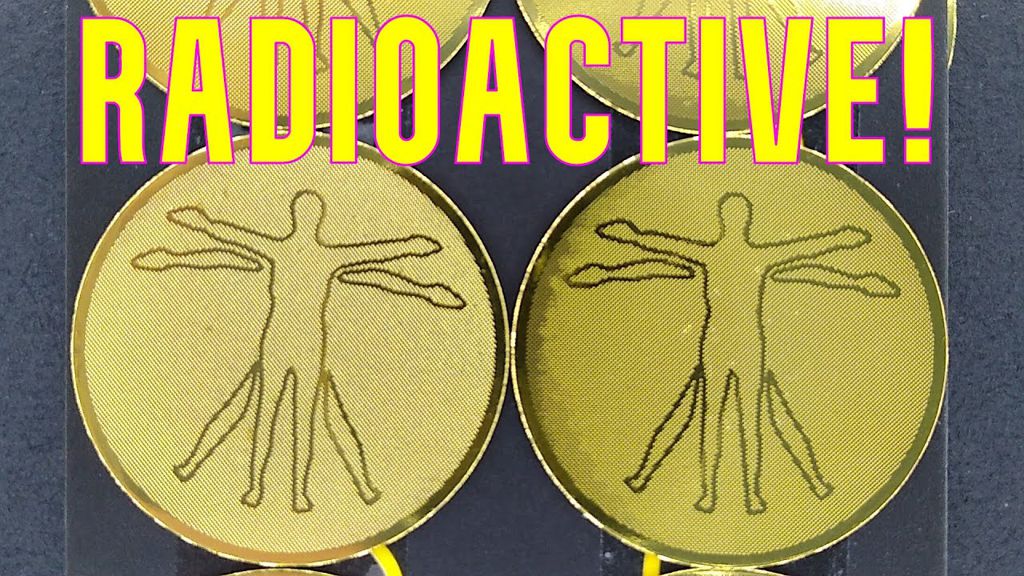 These stickers are sold as "safety" devices that will shield you from RF energy from your phone and other home appliances. In reality there's nothing safe about them.
Worse still, they may pose a genuine safety risk by exposing the user to an unnecessary level of radiation from what is presumably the thorium dioxide commonly used in this type of product.
If you see someone using these stickers, tell them that they may pose a radiation exposure risk and advise removing them.
This all stems from the lucrative conspiracy industry that invents scaremongering pseudo-science to encourage people to buy useless or sometimes dangerous products to protect them from the implied hazards.
I have huge concerns for the factory workers involved in manufacturing these quack devices. The thorium is normally added in a powder form, meaning that they will invariably be breathing in and ingesting radioactive material for no justifiable reason at all. This will cause them health issues in later life.
The whole concept of the new 5G standard is to create a system akin to a street-wide WiFi network that will effectively lower the RF output of modern phones. A metal sticker like this may actually interfere with the antenna in your phone and cause it to transmit at a higher power level than required. The same conspiracists have already started creating false hype about the future 6G standard despite it still being under development.
There's a long history of this behaviour, including implications that electricity would kill everyone and that if vehicles went too fast people would stop breathing and die. The perpetrators are usually not technically inclined and create false science to promote their agenda. Some even buy doctorates to imply they are medical experts.
If you enjoy these videos you can help support the channel with a dollar for coffee, cookies and random gadgets for disassembly at:-
http://www.bigclive.com/coffee.htm
This also keeps the channel independent of YouTube's advertising algorithms allowing it to be a bit more dangerous and naughty.
#ElectronicsCreators

Ah, yes, we revisit this old subject again. I'd like to thank james for sending me some of these lovely anti-radiation stickers from amazon who are still selling them, and the idea is that you stick these inside your phone and it basically absorbs all the harmful energy. The electromagnetic radiation, so it says, features absorb and transfer electromagnetic radiation waves by using special materials and reduce mobile phone radiation injury on the human brain of 99.99. It suggests you can use them for applications like mobile phone, laptop microwave oven, tv set refrigerator, hair, dryer and other electric appliances.

Oh that's my brother arriving. I wonder if he wants to see these too i'll. Let him come in and then ask him what he thinks of these, but in the meantime, let's test these, i think he may have been beset by a little kitty. Hello, ralph, making a video but you're welcome to join in right.

Now it's right up your street. So other things to say how does electromagnetic radiation from electronics affect the body? Our bodies can absorb electromagnetic radiation as energy, meaning molecules in the tissue directly exposed to radiation get excited, in other words, they heat up. Do you like these stickers off? Oh, they look lovely. You put them on your phone and do it they do or they they kind of transform it into something dynamic.

So it's going to detect a slight ambient level. I think my bench is unfortunately more radiation than radioactive normal and, let's just press some of these little stickers up against the geiger counter tube, oh think, about it, starting to go up. Oh, it sure is starting to go up yes, because these are actually redirective. What yep can be good for you? Well, it can be good for you, but is it better than five g's uh? So it is increasing dramatically because these almost certainly contain thorium dioxide, which is uh not great, to have stuck to the side, your phone and then put in a pocket.

So it's pressing against the side of your leg in the same place, all the time that is going to give you an overdose of radiation, so it says anti-radiation, emr, shield, negative, ion and far infrared caring for health. It's all anti-electromagnetic radiation. It can effectively remove phenomena such as headache, insomnia and hair loss. I think it could probably cause hair loss and preventing radiation.

It's not it's actually causing radiation. Oh, i don't want to buy that. No, you don't want to buy these, you don't want them on your phone, but people do have them on their phones, because they're buying them from amazon and sticking on their phones for health effects. Are some people stupid? It's not stupid.
It's just they're a bit naive and they don't realize what this is, because it's been missiled as deceptive advertising is naive, is naivety, a form of stupidity. No, let's not. Let's not accuse them of that they're innocent in this what's happening here, but the main thing is think of the factor. That's making these where i'm not sure if the radiation is in the metal or if it's in the adhesive.

I think it's probably going to be in the adhesive just because it's easy to get the thorium dioxide in there and those factory workers are breathing. In that dust, because it's usually in powder form and they're getting exposed to huge quantities of radiation in the most harmful way possible, and that's not good. So if you see someone with one of these in their phone, tell them that it's possibly radioactive and encourage them to remove it, because it will potentially save them from later health problems in life. Cheerio.