Inside a snow machine blower 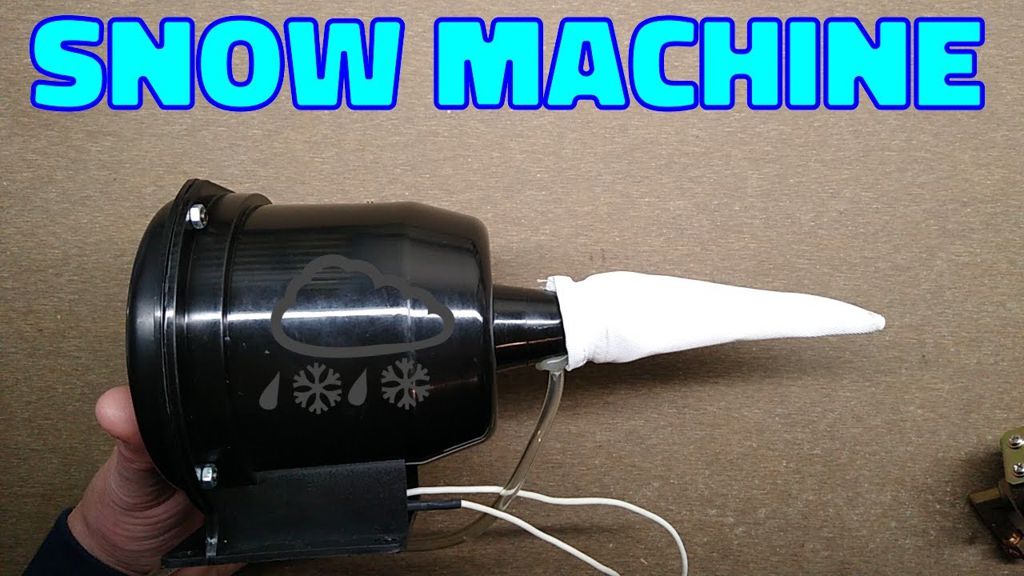 I've often explored the pumps, but I don't think I've taken a snow machine blower assembly apart.
I've experimented with snow fluids in the past - with both shampoo, bubble bath and surfactants (Surface Active Agents - they're the chemicals that make water foamy). The manufacturers are very cryptic about their ingredients, but the main one is water with a very tiny percentage of surfactant. The best formulas will give a very light fluffy snow effect, while a simple surfactant/water mix may result in a wetter, heavier snow.
It's possible that some manufacturers add a more volatile element like isopropanol to the water to accelerate evaporation of the water from the foam.
It's possible that the use of distilled water has an advantage over tap/faucet water, as the impurities may reduce the foam. Especially salts. I don't recommend storing snow fluid for long periods of time for hygiene reasons as it lacks the sterile fluid and inherent pasteurising effect of a fog machine.
One of the best results I got was using benzalkonium chloride - a surfactant that is also used as a sanitiser, but the result was also very unpleasant to breathe. That does suggest that the choice of surfactant is very important in creating the best effect. It's a shame the benzalkonium chloride was so unpleasant to breathe as it would also have made the fluid very sterile.
Less surfactant is better. Typically just 1%. Too much and the foam can hang about too long and pose a slip hazard. It's also better using a low concentration to make it more skin-friendly.
Some commercial applications that use a lot of fake snow use foam concentrate for dilution with water. It's probably just a pure surfactant.
The blower motor is a centrifugal type with a universal motor for high torque and speed. In a snow machine it should get decent cooling airflow. The biggest factor in reliability of the motor is probably the vicinity of soapy water. That's definitely the bit that clogs and corrodes the pump. Especially when the machines are stored for long periods of time. The pumps are easy to source on eBay due to their use in many different FX machines.
The fabric sock has the feel of a synthetic polyester fabric. It is normally held on the output nozzle with a cable tie. The "foam party" machines often use a tubular sock, but the tapered nature of the snow sock is possibly to compensate for the airflow pattern from the outer foam stripping holes.
Some companies use these core blower modules on the front of larger fans for better snow dispersion. It's notable that the blower is ungrounded and in a plastic housing. Probably to reduce the risk of tracking and rogue RCD/GFCI tripping caused by the inevitable water ingress.
Supporting the channel with a dollar or two on Patreon helps keep it independent of YouTube's quirks, avoids intrusive mid-video adverts, gives early access, bonus footage and regular quiet Patreon live streams.
https://www.patreon.com/bigclive
#ElectronicsCreators

10 thoughts on “Inside a snow machine blower”