Inside a defrost thermostat and thermal fuse 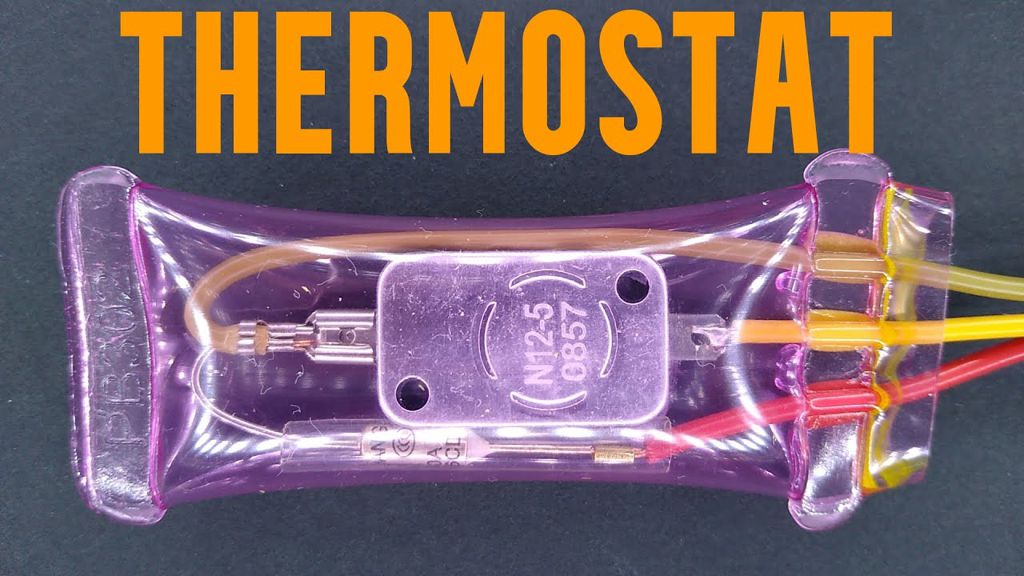 Quite an interesting and cost-engineered construction.
The thermal fuse turns out to have a sliding contact that is held in place against a contact in the ceramic cap by the short and more powerful spring that is also pressing against a compound that melts at a specific temperature. When it does melt, the spring is pushed down into the melted compound (which may have been the powder by the time I'd squashed it), and the weaker spring then pushes the sliding contact down away from the ceramic cap's contact and breaks the circuit.
The tough plastic sleeve with the end crimped around the wires is a very clever way of making a sealed package for use in a wet environment. A fascinating bit of cost-engineering.
If you enjoy these videos you can help support the channel with a dollar for coffee, cookies and random gadgets for disassembly at:-
http://www.bigclive.com/coffee.htm
This also keeps the channel independent of YouTube's advertising algorithms allowing it to be a bit more dangerous and naughty.
#ElectronicsCreators

Let's take a look at a defrost thermostat, you might find one of these in your fridge or freezer, and it's in a very cost engineered package. It really is minimalist and one of the most interesting things if i zoom down this you'll, see that to make a hermetic seal is that is that a valid? Can i call this hermetic it is. It does feel slightly pressurized, but the true definition of a hermetic seal is one that's ear proof, but in reality these wires could theoretically pass air down inside. So i'm not sure would happen in a veering pressure if they'd have equalized.

I don't know if the way it's been crimped here, the plastic of the cable itself has been fused into this plastic. I wonder if that also pushed it in amongst the cores inside the bar, but anyway this thing has a thermostat which it says, n12-5, not sure that is, but i would expect it to go just above freezing temperature that it would cut out. It would normally be closed. It would actually open up as soon as it reached us of higher temperature.

At the moment it is open because uh it's at room temperature, which is how it's designed to work. There is also a emergency last resort 72 degrees celsius. Thermal fuse in here that if the this fails and it keeps the heater on all the time this fuse will blow now, it's interesting. Let's open this up, it's marked pb302! I looked that up on ebay.

Can i want more out here. I want to open it more. Let's try snip it down like this and cutting it down along the side of i this of want to actually peel this off and see if it's done any damage to the cables as well. I may have to pause to peel that open, but in the meantime i don't know, let's just keep going.

Let's just keep going mm-hmm, i'm keeping going we'll open the actual the thermal trip as well. It's quite interesting the way these work, because everything's cost engineered uh when the the motor there's a motor, a geared motor that initiates a defrost, it's very, very slow, but the gear motor is designed. Such it's got a little cam that just swipes around wheels. I've shown in a previous video and when it turns on the heater, it switches the motor itself off and then, if it was to continue again, it would almost immediately switch back to the motor running again.

So what actually happens with this is that the motor, because the way it's configured in the circuitry it switches itself off, brings the heater on, but as soon as the heater is up to temperature - and this goes open circuit - the motor is effectively wired across this. So the motor starts again running through the finding a path through the heater, and then it terminates the defrost. It's quite interesting notice how this wire at the bottom is soldered. This one is crimped, and this is a crimp here.

They usually use crimps and thermal fuses, because if you solder them it can actually trigger the fuse. So, let's cut some wires, i shall bring in a pair of side cutters, so i'll cut that one and i'll cut that wire down there, and indeed that one, let's cut all the wires. Now i want to kind of peel this apart and just see how tightly it's sealed inside. I think it's sealed very tightly.
Let me grab a pair of pliers and use brute force and ignorance to peel my way into this. That is super tight. I wonder how much uh setting up with equipment is needed to actually get this accurately to the point. It doesn't damage the wires i'd.

Guess there is a possibility that they could at the wrong temperature could physically expose copper. But having said that, it's just squishing the plastic, isn't it and it is shrouded under here, so it shouldn't be too bad. Let me have another go at this, occasionally checking the screen to make sure i am actually in shot pewn off. It's exposed the middle wire, which is the orange one, is it damaged by? I mean it's, it is now, but how is that sealed? That is totally fused onto the plastic? Oh, that is totally fused on and it doesn't look like it's uh done much damage, although you can see some of the color spread where it's pinched, i think it's just a tiny amount just because well it's crimped it flat.

It must hold these wires in a jig when it does it and then crimp it very precisely with some indents in the dies for that interesting stuff. Okay, let's open the thermal fuse which is kind of crimped shut. This is where a sharp pointy object can be used to stab my fingers. I expect a bi-metallic disc inside list, but we'll soon find out, it's interesting how the products are just so cost engineered.

There's a disk is that the disk - oh there's the bi-metallic disk and a little plastic spacer, so here's the disk, clicky clicky clicky, and it just pushes that contact down to actually break the circuit. Interesting. What about the thermal fuse? I don't think i've ever opened. One of these i should open one of these shouldn't.

I i really should open one of these, it's kind of sealed with a bead of stuff at the end. What if i squish it, this might not be the way to open it. It might not be an easy thing to open full stop, but you know there's only one way to find out and that's to try and open it. This actually feels fairly solid or maybe not there can i slice into this in some way.

Oh, that is ceramic at the end, that'll be why it's so solid yeah that that would definitely work. Let's try pinching the end off this. It's making scrunchy noises uh right. What does it reveal? It reveals powdered ceramic.

Oh, you know what i bet. It's got a very thin wire going through that that, when it melts it may kind of absorb into that like a high rupture capacity. There's actually, what looks like a a little spring in there right tell you what give me a second, i'm just going to pause. While i peel this back, because i think it's going to take a moment one moment please, okay, that was kind of inconclusive.
I think it would be interesting to take a dremel to one of these and slit one open because it had two springs in it: a small heavyweight spring at the bottom, and it had a softer spring above that with a sort of serrated spacer. I'm wondering if these were actually making sure don't eat in this powder, because well i'm trying to lick my fingers to pick this up. This is probably a bad idea with unknown white powders on the table, but i'm guessing that maybe there's a thermal alloy like a low melting point soda and then the springs retract uh to break the circuit. But then this loose powder inside then fills that space to make sure it can conduct through it.

I'm not sure it wasn't really as obvious as i was expecting. I don't really see a sign of the obvious alloy that i was expecting, but interesting, very interesting indeed, but there we go that is what's inside these cost optimized refrigeration industry thermostats. This one came with sort of a wiring loom, suggesting that it's probably made to fit a standard model. Well, that's pretty that's a statement to the obvious, but um.

It appears that you can get these readily on ebay. I'm not sure the quality would be usually you're. Better going to a prominent part supplier, if you do have a failure of something like this in your fridge, because defrosting tons of food or or cooking it at a high temperature inside the fridge, when the heater jams on is not really a good option. But there we go worth taking apart, interesting, to see inside bonus extra footage, how the thermal fuse actually works and what those two springs were.

The thermal fuse actually has a sliding contact inside it's a little uh plate flared out onto the ends, so it actually can slide backwards and forwards inside the metal tube and the metal tube is one of the connections it's bonded on here. The ceramic insert at the end has the pin going through to contact here, and normally this heavy spring pushes this sliding contact against that contact there. When the temperatures reach that this compound at the end here that that heavy spring presses against melts that spring is then pushed into the melted compound by this weaker spring, and in doing so, it slides the contact inside the tube away from that contact and breaks. The circuit that's how they work.

I did not know that was how they work. The powder that came out may actually have been the crushed compound that was going to melt uh. I guess it's basically put in as a sort of powder and compacted down. I'm not really sure but um.

That's quite interesting. That's absolutely not what i expected them to be like in normal operation. So there we go. That's something i've learned tonight as well: good stuff,.
.

14 thoughts on “Inside a defrost thermostat and thermal fuse”