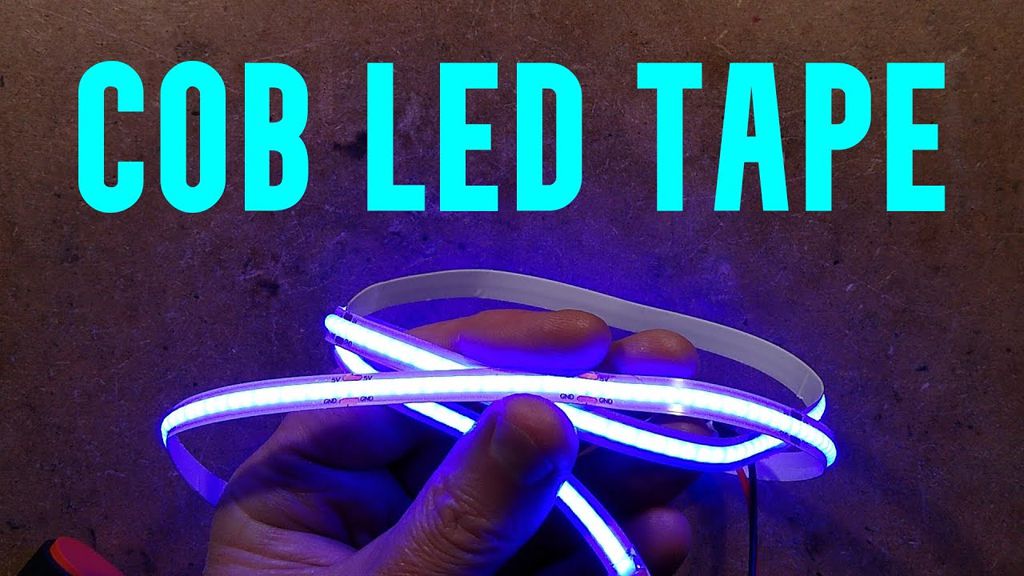 It's a while since this stuff first appeared, but I wanted it to standardise and come down to a more realistic price before featuring it. That has now happened, along with a myriad of colours, voltages and strip widths.
The main difference between COB strip and standard LED strip is that instead of using widely spaced high output LEDs, the COB version uses a lot of tiny ones spaced closely together behind a common line of phosphor loaded gel. That results in a very sharp linear line of light.
To achieve the high LED density they have used the very clever flip-chip LEDs that are widely used on large COB arrays. These are basically bare LED chips with pads on the base to allow them to be soldered directly to PCBs like a conventional surface mount component.
It's worth mentioning that this 1-metre (3'3") 5V strip drew over 2A when powered, so it is best suited to short sections. For longer runs use 12V or 24V strip that achieves the same power at lower current. For even intensity along the length on long runs, feed the positive from one end and negative from the other.
As with conventional LED strip you can nudge the intensity and current down by varying the voltage slightly. This 5V stuff still produces a good visual line of light at 3V.
If you enjoy these videos you can help support the channel with a dollar for coffee, cookies and random gadgets for disassembly at:-
http://www.bigclive.com/coffee.htm
This also keeps the channel independent of YouTube's advertising algorithms allowing it to be a bit more dangerous and naughty.
#ElectronicsCreators

Let's take a look at cobb led strip versus the traditional sort of pixely led strip, so the traditional led strips that first came out were based. Typically, they were 12 volt and they had a resistor and then three leds per section. The three leds in series and then the resistor to limit the current through those and you could cut it at every roughly well. What is this one um a ruler? Is this going to be metric or imperial? It is metric 50 millimeters, which is roughly 2 inches.

The cob stuff also cuts every 2 inches or 50 millimeters, but there's a huge difference where that, whereas there's only three leds in each section and the cob stuff, there are actually 16 tiny little leds under here and i'll show you them lit so i'll have to Wake the power bank up turn it on keep in mind that this one meter section that's just over three feet and it's very bright uh actually draws over two amps and it's just they're not running the leds super hard. It just so happens that there are well there's approximately 320 of them in one meter section it does come with a dimmer. So, let's see, if i can dim this down to the point, you can see the slight pixilliness so dimming there we go. Ah right! Okay, oh slight, ripple there that's the pulse of modulation, but now you can see how close those leds are, and you wouldn't normally see these dots on the tape, because the phosphor would normally help diffuse them out.

I chose the blue stuff for this because i was hoping it was going to be clear gel, but it is diffused to actually try and diffuse that, but nonetheless i cut it off and i took some photos to see what we could see. So i shall zoom out with this, so each section has one two, three, four five. Actually this is less than a section. I've cut this down, but each section actually has eight sets of these a little resistor.

I believe it's uh, oh 603 resistor and then what are called flip chip leds and i'll show you what those are afterwards and the resistor is a in series of two leds in parallel. They've just done that to reduce the number of resistors. Technically speaking, it means that you can cut this tape in the these sections here. You could actually cut it down to a very fine length based on the fact.

This is eight millimeters wide across it. The flip chips themselves, the ten little leds, are approximately one millimeter which is bigger than i was expecting, but i destroyed this one and scrubbed it away to get into the copper as you can see, and that shows the pads the resistor and the solder on the Flip chips, which are soldered directly to the copper tracks, and we see the bus bar track, come along here, going down to the two leds and then the one up here coming up to the resistor and then going down to the leds. And i can show you this in more detail if i bring in a doodle that i did of it here is my doodle. So here are the bus bar tracks and they are once again echoed on both sides of the circuit board and every time you come across these uh cutting pads.
It also bonds across to the other side. At that point, the flip chips are leds that can be soldered directly onto the circuit board. I can show you what i mean by that right now, a conventional led would have had the multiple layers and then a gold bond wire going off the chip onto pads and it's very time consuming for manufacture. The flip chip actually has pads built on and it solders on just like a surface mount component, but it is the most bare component possible.

It's basically a bear chip with no carrier that solders onto the pads, very very tiny, goodness knows how they do the pick and place in those. But there are advantages to this. It's much easier to manufacture because you pick and place on disorder paste and it's also got better thermal coupling into the actual circuit board for dissipating and that's why so many of the large cob arrays of leds use the flip chip. Now it saves the problem of stress that used to get the gold bond wires and also just makes a lot cheaper to manufacture.

So that's these little leds here and they'll have that little bridge of soda. At the end, this is the configuration you get. The plus five volts - and it comes down to those leds, and then it goes through through that resistor, which is rated 150 ohms, and the current is shared between the two leds. It's typically about 16 milliamps per pair, so each led is drawing roughly about 8 milliamps and it's an interesting effect.

The spacing is 3.1 millimeters between them. It's it's very uh, it's very dense. It gives a good effect and uh. They do other versions that are only apparently four millimeter wide that run at higher voltage.

They can't really do them at the lower voltage because uh with the five volts the current gets up very quickly. I wouldn't want to run even even with one meter that is over two amps at five volts. The voltage drop is going to be fairly significant along the drone from end to end, and it's significant enough that if you actually work out the current well, if i was to cut a little section off this um and power up in its own, it would draw Slightly more current than the other sec segments in the strip because, as the voltage drop, the current would decrease through them. I'm going to pair this up again because i didn't experiment, i did a random cut and got lucky.

You can actually see one of the flip chips right up the end there. I don't know if you're going to see that sharp point of light i'll, try dimming it down a bit that might work. Can you see the point of light there? I got lucky and just skimmed across that, but left it intact. If you cut the strip, say, for instance, right in the middle of a resistor or with that led on its own.

I guess when the leds go quite bright, it's a bit bit of a lucky dip, i'm going to turn the leds off before i do this, i'm going to cut it again. Let's see, i think, that's probably just cut one. It has there's a very slight difference in intensity because all the current is going through that one led now. You can't really see it um, but it does mean you can pretty much cut it to any length you like really, and you may just lose.
Maybe three millimeters or so of the uh illumination at the end of the strip, much like the f50 led knee and the way they manufacture that they just cut it wherever they feel like it and the glow residual glow from the led. That's remained intact. Kind of spreads up to the end, but it's neat stuff. The thinner stuff is about four millimeters thick.

It uses the 12 volts or 24 volts because they can do that because it keeps the current down and also it is basically largely bus bar in the back of the circuit board and to a degree in the front and then just everything's squished in. But it's pretty neat: it produces a very sharp uh line of light, and that is quite smart compared to the traditional stuff like this, that produced a very pixely effect and it's also available because they're using blue chips or ultraviolet chips behind a phosphor. It's available in a wide range of colours, so it's quite smart stuff, a very interesting evolution.